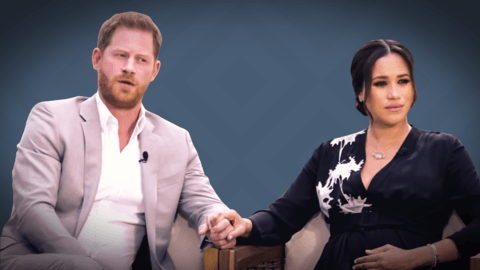 Another brief clip from Meghan Markle and Prince Harry's highly-anticipated interview with Oprah Winfrey is out now, where the couple talks about the late Princess Diana. Harry is seen thanking his wife, who was sitting beside him during the interview. He also said that he would not want "history repeating itself," referring to the insane media pressure that his late mother, Diana, had faced.

Interview
What exactly did Harry say about Diana?

In the clip, Harry is seen holding Markle's hand, as he talks about Diana. "You know, for me, I'm just really relieved and happy to be sitting here talking to you with my wife by my side. Because I can't begin to imagine what it must have been like for her (Diana), going through this process by herself all those years ago," he said.

Markle, who's pregnant with their second child, paid tribute to her late mother-in-law in a fashionable way. She was seen wearing Diana's bracelet during the interview. Apparently, her engagement ring also has a Diana connection. Designed by Harry, it contains a diamond from Botswana, and two others from Princess Diana's personal jewelry collection. Last year, it was voted the world's second most popular ring.

In another teaser, the former Suits actress called out the the Royal family for "perpetuating falsehoods," while talking about breaking ties with them. "I don't know how they could expect that after all this time, we would still just be silent if there is an active role that The Firm is playing in perpetuating falsehoods about us," Markle said in the interview.

Friction?
'Harry and William have not spoken for some time'

According Daily Mail, there's apparently a lot of friction between the Royals and Harry-Markle. So much so that even Prince William has no idea about the contents of the interview. "Harry and William (his elder brother) have not spoken for some time, and Meghan speaking about their relationship or relationships with the Royal Family to Oprah will not help matters," said a Royal source.