'Jack in the Box': BTS J-Hope wows with solo album 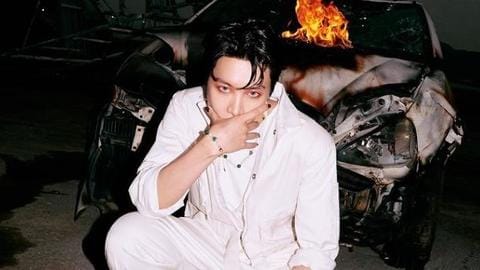 Roll up your sleeves and make way for BTS's J-Hope as his solo album Jack in the Box premiered earlier on Friday. The album was released along with a music video of its title track Arson. On July 1, J-Hope pre-released a track MORE to give a taste of what's to come. Both MORE and Arson are the title tracks of this album.

Context
Why does this story matter?
Data
All you need to know about the album

When the album was launched, 3,53,633 live viewers tuned in for the premiere of Arson, which received over 2,56,000 likes. Jack in the Box contains eight other tracks namely Intro, Pandora's Box, STOP, =, Music Box: Reflection, What If..., Safety Zone, and Future. J-Hope worked on all the songs and also took part in the overall composition and planning of Jack in the Box.

The night before the album's release, several celebrities took part in an event, which was reported to be an exclusive pre-release listening party. BTS members RM, Jimin, V, and Jungkook were also present at the event to extend their support to J-Hope. Artists like Jessi, Sunmi, Tiger JK, Yoon Mi-rae, Cha Eun-woo, Uhm Jung-hwa, BIGBANG's Taeyang, to name a few, were also present.

Besides the solo, the rapper's fans have more to look forward to this month. He is set to perform at the closing ceremony of the upcoming Lollapalooza music festival in America on July 31. With it, J-Hope will be the first South Korean musician to lead the music festival. BTS's previous release was an anthology album Proof, which was released on June 10.