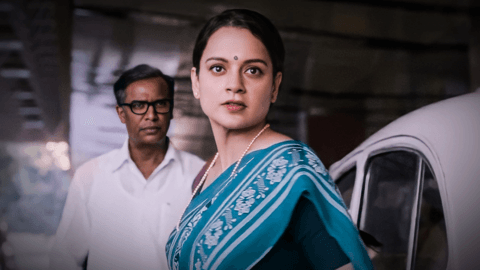 The trailer of Kangana Ranaut's Thalaivi is out and it is impossible to take eyes off the 34-year-old actress in the over three-minute-long clip. Ranaut looks like a spitting image of late J Jayalalithaa, who was famously known as Amma in Indian politics. Her portrayal of the deceased politician is bound to get her accolades from all corners. Let's dissect the clip for you.

The trailer starts with the name "Jaya" and within seconds we are given an insight into her struggles. One man can be heard asking what would a film-waali teach them about politics. Soon, the clip turns its focus on the cinematic journey of Jayalalithaa and her equation with MGR, a celebrated film actor and founder of AIADMK. He also served as Tamil Nadu's CM.

Bond
MGR-Jaya's relationship and her political journey get attention

While shedding light on the bond between Jaya and MGR, the clip also reveals the questions that she was forced to answer. At one point, a man was seen asking her what was she doing behind a closed door with MGR, only to get a sharp response from the actress. The trailer then shows how MGR advised Jaya to join politics.

Incident
The shameful assault on Jayalalithaa also figures in trailer

While the makers of the movie have done a fantastic job at portraying all aspects of Jayalalithaa's filmy and political journeys, what grabbed the attention of netizens was the disrobing incident. In 1989, Jayalalithaa, the first woman to occupy the Leader of Opposition's seat in the Tamil Nadu Assembly, was assaulted by DMK members. The image still continues to haunt Indian politics.

Details
The movie will hit the screens on April 23

Notably, the movie has been penned by celebrated writer KV Vijayendra Prasad, who had earlier written the Baahubali series and Bajrangi Bhaijaan. It has been helmed by AL Vijay. Besides Ranaut, the movie will see actor Arvind Swami as MGR, Prakash Raj as M Karunanidhi, Jisshu Sengupta as Sobhan Babu, and Bhagyashree as Jayalalithaa's mother Sandhya. It will release on April 23.