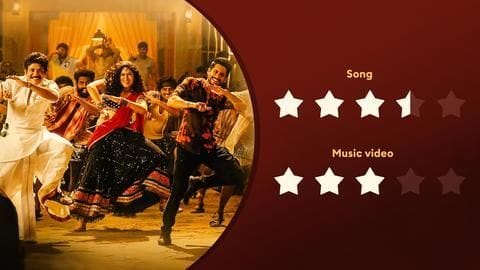 The lyrical video of Vaasivaadi Tassadiyya is here and must say, it has amplified the buzz around Nagarjuna and Naga Chaitanya's Bangarraju. Before this, the film's makers released two songs, Laddunda, and Naa Kosam. While Laddunda, sung by the Criminal star, was an upbeat track, Naa Kosam was a soulful melody, but this one will set the dance floor on fire. Here's our review.

Music
Starts with the traditional harmonium, ends with trumpet music

Mohana Bhogaraju, Shahiti Chaganti, and Harshavardhan Chavali's vocals are strong and their mastery of singing shines in this single. The Anup Rubens-composition is full of interesting moments, like, when the beats elevate after a brief drop, it sets the mood right. The song starts off with the exotic and traditional harmonium, and eventually goes to a peak toward the end with brief trumpet music.

Anticipation
The song may not be relevant to the story

The lyrics indicate that the song has nothing to do with the story and has been presented only to add a zing or masala to the film's album. While all the actors are seen in vibrant costumes, Nagarjuna is seen in white dhoti and kurta, indicating that the number may be placed after his return to earth with the help of Lord Yama.

Vaasivaadi Tassadiyya is of course a firecracker. Faria Abdullah's dance moves and adorable expressions add more party elements to the song and make it all the more enjoyable. Nagarjuna's expressions are organic, and we can say without a second thought that he outshines everyone else when it comes to the actors. Ramya Krishnan also makes a brief and blink and miss appearance.

Details
All you need to know about the film

Verdict: Vaasivaadi Tassadiyya is an energetic party number. Music bags 3.5, while video takes 3 stars. Directed by Kalyan Krishna Kurasala, it will have Krithi Shetty as Chaitanya's romantic interest, while Krishnan will be reprising her role of Satyabhama from Soggade Chinni Nayana, prequel to Bangarraju. Nagarjuna has bankrolled the project along with Zee Studios. Its release date is expected to be announced soon.