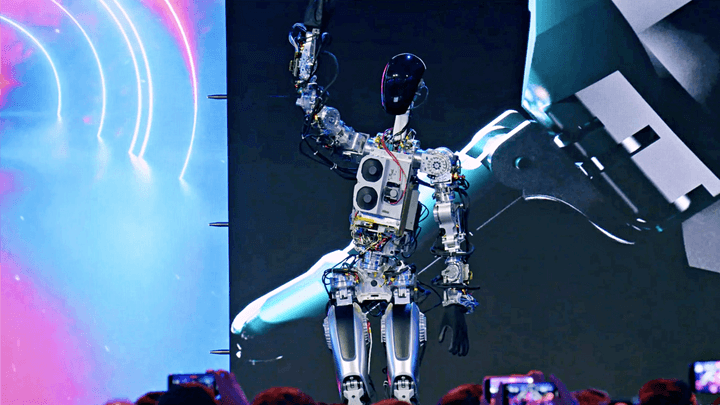 At Tesla's 2022 AI Day presentation, the company's CEO Elon Musk unveiled a prototype of "Optimus," a humanoid robot. The robot uses some similar AI tools and sensors as the Autopilot driver assistance features in Tesla vehicles. According to Musk, the machinery should cost less than $20,000 (nearly Rs. 16.2 lakh) and "could get done within the next few months... or years."

The robot performed a dance move on the stage

Musk unveiled the deconstructed Optimus robot that consciously walked forward and performed a "raise the roof" dance move. Several clips were also played demonstrating the robot's ability to accomplish human-like tasks such as picking up boxes. It even waved to the crowd but didn't make too many moves on stage since Musk wanted it to be safe and not "fall flat on its face."

Optimus robot's joints were the focus of demonstration

The robot's joints, such as its hands, wrists, and knees, were the focus of Tesla's demonstrations. The company demonstrated how the company processed data for each joint. According to the engineers, the robot's human-like hands were a result of a "Biologically Inspired Design." In the actual unit, they will be made more convenient for lifting or picking up objects of multiple shapes and sizes.

Tesla disclosed that the robot displayed had only been created in the last six months. The humanoid bot contains a 2.3kWh battery pack and a Tesla SoC and supports Wi-Fi as well as LTE connectivity. It also features a retooled version of Tesla's Autopilot software for cars. Tesla motion captured individuals performing real-world tasks and made the Optimus replicate those movements using inverse kinematics.

Humanoid robot walked without tether for the first time

The humanoid robot was restrained from performing much on stage in order to keep things under control. Tesla claims that the prototype can accomplish more than what was demonstrated in real-time. According to Musk, this was the first time the robot had walked on stage without a tether. The Optimus robot is set for mass production in "millions" of units.

The robot's production could begin by next year

We don't know when a production-ready Tesla Bot will get released. The company's history is brimmed with ideas that never materialized—the robotic snake-style chargers, solar-powered Supercharger network, and more. But Musk's unwavering determination has driven Tesla to where it is today. The robot's production could begin by next year, but robotics experts have cautioned against buying too much into the claims made by Musk.