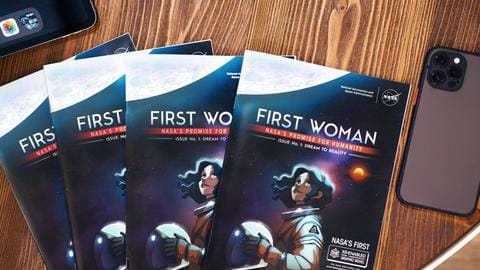 NASA released its first digital, interactive graphic novel Saturday in a two-pronged effort to commemorate National Comic Book Day as well as to encourage more youngsters to sign up as astronauts for the planned Artemis manned lunar missions. The comic, titled First Woman, chronicles the story of a fictional character, Callie Rodriguez, who becomes the first woman to land on the moon.

In this article
AR-enabled

NASA's new 40-page comic book can be read like an ordinary comic. However, the space agency prompts readers to download a companion app available on both Android and iOS. The comic contains XR codes (or QR codes for the web) that can be scanned to experience objects and environments more realistically using augmented reality (AR).

Scanning the codes in the comic allows you to take a virtual tour of Orion spacecraft, the Moon, and other celestial bodies and objects. The reader could also play interactive virtual games, watch videos, and earn badges. NASA has promised to release the novel in Spanish sometime in the future. An audio version of the comic already exists on NASA's SoundCloud.

NASA said it wants to inspire readers to become astronauts

NASA does indeed plan to send the first person of color and the first woman to the moon as part of the Artemis manned missions. Rodriguez's story, although fictional, also makes it a point to emphasize NASA's cultural diversity. The space agency doesn't mince words when it says, "Through this graphic novel, NASA aims to inspire the next generation of explorers—the Artemis Generation."

NASA Deputy Administrator Pam Melroy said, "The story of Callie captures how passion, dedication, and perseverance allow us to turn our dreams into reality." She added, "Callie, much like myself, grew her skills, seized learning opportunities, and overcame challenges to become a NASA astronaut. Her diversity is reflected in our own astronaut corps today." NASA also has a dedicated website for the comic.