Realme GT series to debut in India on August 18 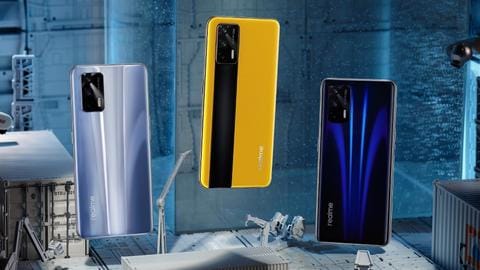 Realme India's CEO Madhav Sheth, in the latest episode of #AskMadhav, has revealed that the flagship GT 5G and GT Master Edition smartphones will debut in India on August 18. Sheth has also confirmed that the India-specific GT 5G will be the same as the global variant and it will cost more than Rs. 30,000 in India. Here's our roundup.

The Realme GT 5G and GT Master Edition feature a punch-hole design with a slim bottom bezel and an in-display fingerprint sensor. On the rear, they have a triple camera setup. The handsets bear a 6.43-inch Full-HD+ (1080x2400 pixels) Super AMOLED screen with a 20:9 aspect ratio and a 120Hz refresh rate. They are offered in three color variants each.

Internals
They run on Realme UI 2.0 based on Android 11

The Realme GT 5G and GT Master Edition draw power from a Snapdragon 888 and Snapdragon 778G processor, respectively, paired with up to 12GB of RAM and up to 256GB of storage. The former packs a 4,500mAh battery, whereas the latter houses a 4,300mAh battery. The duo offers 65W fast-charging support and boots Android 11-based Realme UI 2.0.