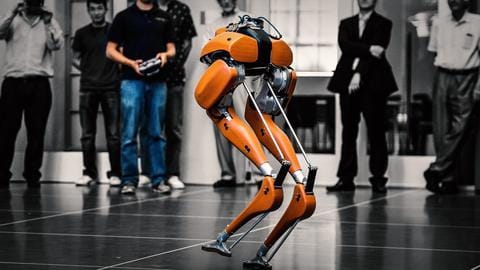 A team of engineers from the Dynamics Robotics Laboratory at the Oregon State University (OSU) revealed that their bipedal robot, called Cassie, has successfully run five kilometers on a single charge without being tethered. This marks a breakthrough in the deep reinforcement learning algorithm used in the robot. The system performed infinite minute calculations to stay upright by shifting its balance while running.

Cassie is a bipedal, ostrich-inspired robot constructed to have legs and little else. The project was first announced by OSU professor Jonathan Hurst in 2017 to explore bipedal locomotion. At the time, the project was aiming for a $1 million grant from the Defense Advanced Research Projects Agency of the Department of Defense. Cassie now forms the basis of Agility Robotics' delivery bot, Digit.

While Cassie won't become an Olympian anytime soon, its 53 minutes and 3 seconds-long run demonstrated immense potential for bipedal robots. The duration includes 6.5 minutes of troubleshooting when the onboard computer overheated, and when the robot fell over after turning too quickly. During the run, the team was reportedly able to reach the limit of Cassie's hardware and show what it could do.

Two legs or four?
Bipeds have some advantages over quadrupeds, but instability tags along

Bipeds' biggest advantage is that they can navigate tighter spaces and facilities like staircases made for humans. However, unlike Boston Dynamics' yellow quadruped called Spot, Cassie can be knocked over quite easily just like a bicycle is easier to knock over than a car. This makes Cassie's achievement of running untethered more significant and interesting. Clearly, professor Hurst concurs.

Cassie taught itself to run better using a powerful subset of machine learning (ML) called deep reinforcement learning that could potentially unlock skills like running, skipping, and walking up and down stairs. In fact, in May this year, OSU engineers trained Cassie in a simulator to go up and down a flight of stairs without relying on cameras and LiDAR.

One day...
Bots like Cassie could become commonplace in the future

Besides the five-kilometer run, Cassie took 43 minutes and 59 seconds to run a 5K on a turf field on the OSU campus. Agility Robotics explained robots like Cassie will one day deliver packages, manage warehouse tasks, and help people in their homes. Cassie and the OSU team's advancements will help further the understanding of legged locomotion, hopefully making bipeds commonplace in the future.