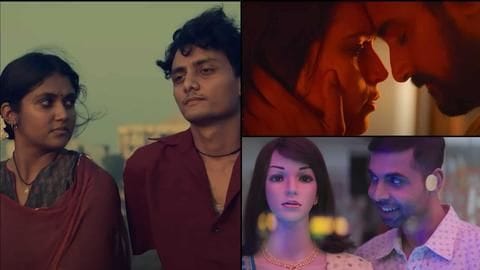 Trailer
Finding, struggling, and getting over love form the topics

The one-and-a-half-minute clip introduces us to three tales set in Mumbai. We have a couple (Kapoor-Hussain) discussing life and relationships in one tale, and two people (Rajguru-Hiwale) falling in love in another. The last one is the most unique, where a man (Banerjee) finds companionship in a mannequin. Exploring themes of love and longing, the anthology will premiere on the platform on September 17.

Expectation
The city will most likely play a crucial part

The city will be a driving force in all the shorts, as understood from the official synopsis that reads: "Cities are a hard place to live in, especially when you're not in love, looking for love, or have gotten your heart broken." Banerjee stars in the Iyer Tiwari-directed section, who said the story will blur "the lines between reality and fantasy."

Coming to Chaubey's segment, based on Kannada story Madhyantara, it's set in 1980s Mumbai. It features Rajguru and Hiwale's young love in the world of single-screen theaters. Meanwhile, Chaudhary remained tight-lipped about his short, starring Kapoor, Hussain, Nikhil Dwivedi, and Palomi. He simply said, "Love stories have always been one of my favorite genres. It's a pleasure to be a part of (this) theme."

Ankahi Kahaniya is the latest announcement in a string of anthologies presented by the giant streamer in the past few months. The last three Indian anthologies Ray, Navarasa, and Feels Like Ishq have opened up to moderate to good reviews. Personally I feel, anthologies are a clever way to hold the audience's interest, as they do not have to invest in a full-length movie.