Finally! Much-awaited love anthem 'Kesariya' from 'Brahmastra' is out! 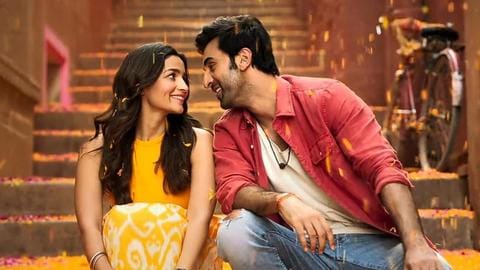 And, it's finally here and how! After what seemed like eons, the makers of the upcoming fantasy adventure drama film Brahmastra have finally released the love anthem of the year: Kesariya. Earlier, a short audio teaser of the song was rolled out that received rave reviews in no time. Ayan Mukerji's magnum opus Brahmastra is heading toward a theatrical release on September 9.

Context
Why does this story matter?
The song
'Kesariya' marks another association between Amitabh Bhattacharya, Pritam

The love ballad is soaked in the mellifluous voice of the ever-excellent Arijit Singh. It has been penned by Pritam's frequent collaborator Amitabh Bhattacharya. Yet again, the phenomenal trio of Singh, Bhattacharya, and Pritam has weaved incredible magic with the chartbuster that is sure to strike a chord with youngsters. It chronicles Shiva's romance with Isha (Alia Bhatt) as they wander hand-in-hand in Varanasi.

Video
'Kesariya' video is a visual treat for the eyes

The song's 2:52-minute-long video is a visual treat, with Bhatt and Kapoor's crackling chemistry breathing life into each frame. From enjoying boat rides to dancing together and talking about each other's destiny—the song has all the right ingredients that will elevate the hype enveloping the film. We particularly loved the usage of yellow and orange palettes—an alluring testimony to the song title!

Do you know?
Sometimes, key to successful films lies in their jukebox

Songs have contributed massively toward a film's overall success and craze numerous times. Some examples include Tum Hi Ho from Aashiqui 2, Sheila Ki Jawani from Tees Maar Khan, Galliyan from Ek Villain, etc. Needless to say, Kesariya is very much in the same league.

Information
Everything you need to know about 'Brahmastra'

Brahmastra also stars Mouni Roy, Amitabh Bachchan, and Nagarjuna, among others. It will mark Nagarjuna's comeback to Hindi cinema after a long gap of nearly two decades after the 2003 war drama LOC Kargil. Film's much-hyped VFX has been helmed by six-time Oscar-winning company DNEG (Harry Potter series, Interstellar, The Adam Project). The film will release in Hindi, Tamil, Telugu, Kannada, and Malayalam.

Poll
What else would you like to know about the movie?
Trailer highlights
50.00%
Latest developments on the film
50.00%
Poll completed
We have got you covered!

Sure, here it is.