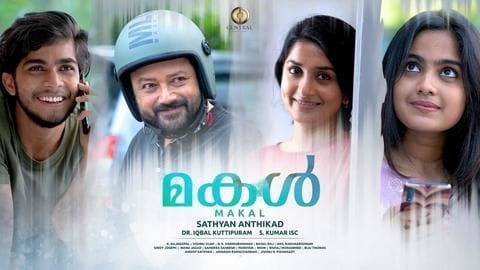 The trailer starts with a woman (Jasmine) and her daughter (Sanjay) having a brief talk. "Why aren't you happy about dad's arrival?" she asks, to which the mother says, "He lost his job. He won't go back again." Enters the dad, Nendettan (Jayaram). He clarifies that he "left it" and hasn't lost his job. And we learn why. He has started a masala business.

Through some hilarious yet emotional moments, makers nicely establish the father-daughter bonding. Fun sequences like Nendettan being shocked when a young chap hugs his daughter or a man sneezing when he smells Nendettan's masala make you smile. The sub-plot involving the daughter's romantic relationship feels fresh. Everything is fine until we get a hint of a twist, which of course, isn't shown to us.

Details
Meet the crew of 'Makal'

Dr. Iqbal Kuttipuram has penned the script of the upcoming film. S Kumar is the cinematographer, while K Rajagopal is the editor. Meanwhile, Vishnu Vijay has composed its music and Harinarayanan has been signed to write the words for the songs. Separately, Jayaram's line-up has Mani Ratnam's Ponniyin Selvan: I, which has Vikram, Jayam Ravi, Karthi, Aishwarya Rai Bachchan, and Trisha in the cast.