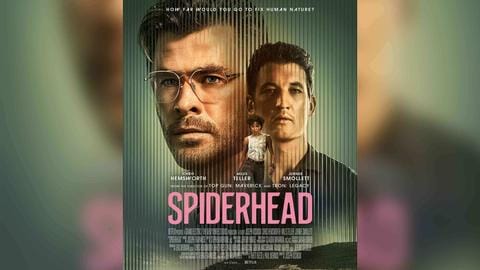 The trailer of Netflix's new mind-bending thriller, Spiderhead, is here! Ahead of its release on June 17, Netflix released the 2:13 minute-long trailer on Tuesday. Chris Hemsworth is joined by an ensemble cast of Miles Teller, Jurnee Smollett, and Joey Vieira in this. Spiderhead is based on George Saunders' short story, published in The New Yorker in 2010. Here's a trailer breakdown.

Context
Why does this story matter?
Trailer
Everything and everyone is shrouded in mystery

A few seconds into the trailer, we meet Steve Abnesti (Hemsworth), who is at the forefront of a futuristic penal institution. Here, harmful experiments are conducted on prison inmates with detrimental drugs that play with their minds. The trailer is fast-paced and cuts right to the chase, exploring Hemsworth's evil character who tells inmates that the prison is "both a punishment and a privilege."

The inmates seem to give permission each time the dangerous N-40 drug is injected into their veins. However, they soon realize the legitimacy of their independent opinions as "this place can really mess with your head." The trailer also has its fair share of humor. For instance, Abnesti says, "The time to worry about crossing lines was a lot of lines ago."

Synopsis
What can we expect from Netflix original?

Netflix's original synopsis reads: "In a state-of-the-art penitentiary run by brilliant visionary Steve Abnesti, inmates wear a surgically attached device that administers dosages of mind-altering drugs in exchange for commuted sentences." Once Jeff (Teller) and Lizzy (Smollett), who play two inmates, realize that their minds are being gradually deteriorated, they form a pact to turn the tide in their favor.

Similarities
What does 'Spiderhead' remind us of?

Spiderhead will instantly remind you of content produced in the same vein, such as Netflix's superhit thriller anthology Black Mirror and Love, Death, and Robots. Both shows have the (mis)use of technology as the central theme, featuring a world where technology pushes humanity into the backseat. It may also take you back to Netflix films such as Choose or Die, Bandersnatch, and Oxygen.