'The Girl On The Train' trailer promises intriguing murder mystery 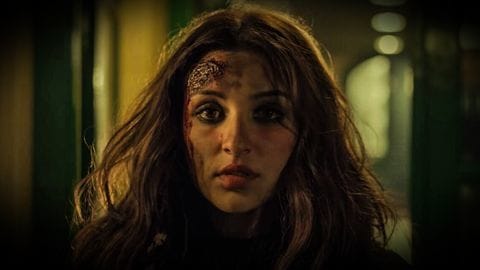 Parineeti Chopra's upcoming Netflix film The Girl On The Train's trailer is now out. The trailer of the movie, that is an official adaptation of Paula Hawkins's bestselling book by the same name, promises a juicy and intriguing murder mystery. The movie has been directed by Ribhu Dasgupta and produced by Reliance Entertainment. Here's more about the trailer.

Details
The trailer juggles between Chopra's past and present

In the two-minute-long clip, the makers have given a glimpse of Meera's (Chopra) dark past and mysterious life. It opens with Chopra, who suffers from amnesia, traveling on a train and obsessing over a woman she sees from the train's window, as she reminds her of her married life. It is followed by a quick montage about her past life.

Meera struggles to decide whether it's her jealousy, self-pity or desire that drives her obsession with the woman, named Nusrat (Aditi Rao Hydari). In a shocking turn of events, Nusrat is killed while Meera, unknowingly gets trapped in her murder investigation. She tries to recall the gruesome incident and solve the crime. Apart from Meera, the trailer also shows the struggles of other characters.

Conclusion
Will Chopra find the missing link in this thriller?

Even as she tries to remember the missing portions of her life, Meera finds all the fingers pointing toward herself. While this movie is a remake of an eponymous Hollywood film, Chopra's convincing acting chops are sure to enthral one and all. So, will she find the missing links in this psychological thriller? We can find that out on February 26.

Apart from Chopra, actors such as Aditi Rao Hydari, Kirti Kulhari and Avinash Tiwary will also be seen in pivotal roles. While Kulhari is playing a Sikh cop character in the movie, Tiwary will be seen playing the role of Chopra's character's ex-husband.

Quote
Chopra thrilled to be a part of the movie

Chopra, who was last seen in Jabariya Jodi, had earlier expressed her excitement on being a part of this project. She had said, "Emily Blunt's performance in The Girl on the Train had blown my mind and it is a privilege for me to play the character that she has essayed so brilliantly on the screen (sic)."

Information
Other upcoming releases on Netflix

Apart from The Girl On The Train, Netflix has several other exciting projects coming up. Telugu film Pitta Kathalu will soon be released on the streamer. Further, Pooja Bhatt-starrer drama series Bombay Begums will also be out soon.