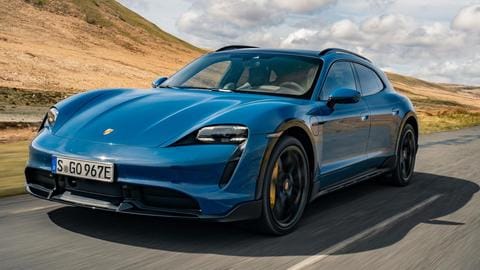 Context
Why does this story matter?
Steps
How was the feat managed?

To set the record, the car had to be spun within a circle twice the vehicle's length. However, mid-way through the attempt, the car shut down as its sensors got covered by the ice that was thrown around. Also, the surface of the ice became uneven due to the impact of the tires. Though Grant's concentration was affected, he managed to do his job.

Earlier this year, the Cross Turismo set another Guinness record for the greatest altitude change by an electric car. As part of the attempt, the car went through six states over a vertical distance of just over 4.8km. Between Eagle Mine, Michigan, and Pikes Peak, Colorado in the US, the four-wheeler traversed over a distance of 2,253km.

The Porsche Taycan Cross Turismo has an eye-catching design, featuring a muscular bonnet, inverted L-shaped headlights, a wide air vent, designer wheels, and a full-width taillamp. Inside, there is a 3-spoke multifunctional steering wheel, multiple airbags, and a 10.3-inch touchscreen infotainment panel. It runs on a 590hp, twin-motor electric powertrain and promises a range of up to 456km on a single charge.