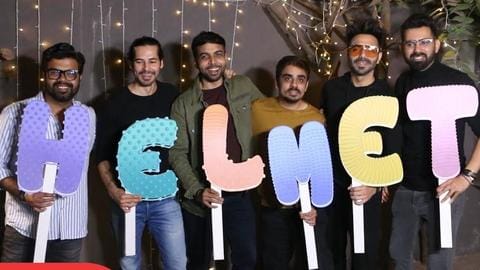 "Everybody wants a condom. But they are scared (of outright buying it)." Aparshakti Khurana's first endeavor as lead, Helmet, deals with this pertinent issue, presented under the foil of comedy. Pranutan Bahl plays the female lead. Directed by Satramm Ramani, the quirky comedy has been produced by Sony Pictures Networks Productions and actor Dino Morea's production house, DM Movies. Here's the trailer breakdown.

Khurana as Lucky opens the two-minute and 42-second clip struggling to buy a condom from a medical shop. Later, we see, he and his friends, Sultan (Abhishek Banerjee) and Minus (Ashish Verma) are in dire need of quick money, so they decide to steal from an e-commerce shipping. Instead of mobile phones, they find cartons filled with condoms, which they must sell now.

Details
Find out if the company Helmet survives on September 3

Naturally, nobody wishes to buy these right away, so our protagonists devise a master plan. Behind the veil of a helmet, they would directly sell the contraceptive tool to the public, functioning under the company, Helmet. Although it feels like the trailer has shown you the entire movie, you can check what remains under the wraps when Helmet drops on ZEE5 on September 3.

Information
It marks the directorial debut of Ramani

Announced in 2019, this project was scheduled to originally release in the theaters in 2020. Helmet marks the directorial debut of Ramani, and Rohan Shankar, who previously wrote Luka Chuppi, which also starred Khurana in an important role, will serve as the writer. "I had a great time shooting for Helmet. The cast and the crew became more than a family," Khurana said earlier.

Typecast
The trailer is bound to remind you of Ayushmann Khurrana

Given the theme and acting perceived in the trailer, Helmet is exactly a subject Khurana's brother Ayushmann Khurrana would attempt. And it will be an added burden on Khurana to prove him distinct. Another mention comes for Banerjee, who had previously voiced his concerns about getting typecast as a comedic actor. We wonder what made him take up a similar role yet again.