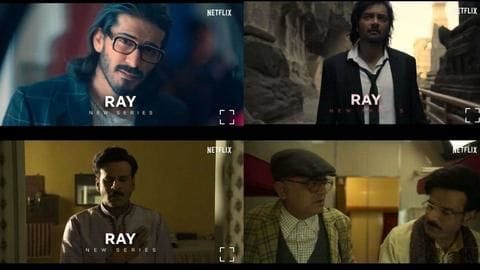 Netflix India has unveiled the teaser of their new anthology series Ray recently comprising four stories are based on the writings of ace filmmaker Satyajit Ray. It will start streaming on Netflix on June 25. The 51-second teaser only reveals the protagonists and the title of their stories. It boasts a stellar cast including Manoj Bajpayee, Kay Kay Menon, and Gajraj Rao, among others.

Teaser
Teaser is intriguing; builds up the excitement

The makers have not revealed too much, and that works in their favor as it creates intrigue. Firstly, we see a pensive Ali Fazal perched in a bathtub. The story is named Forget Me Not. Bahrupiya starring Kay Kay Menon is also a part of the anthology series. We also see actors Manoj Bajpayee and Gajraj Rao shaking hands in Hungama Hai Kyon Barpa.

Details
Stories are based on themes of love, lust, and desire

Lastly, we move to Spotlight with Harshvarrdhan Kapoor as he looks right into the camera. The stories are based on the themes of love, lust, desire, betrayal, and truth with many underlying nuances, brought together by the brilliance of Ray whose 100th birth anniversary was recently marked on May 2. The four stories have been helmed by Abhishek Chaubey, Srijit Mukherji, and Vasan Bala.

Projects
'Ray' was announced as part of Netflix's new slate

To recall, the anthology series was announced in March as part of Netflix's new slate of titles for 2021. The platform announced many new series, movies, and reality shows. Some much-awaited series include Raveena Tandon-starrer Aranyak, Madhuri Dixit's Finding Anamika, new seasons of The Kota Factory, Jamtara, and Delhi Crime. The viewers will also get new stand-up specials, including Kapil Sharma's highly-anticipated comedy special.