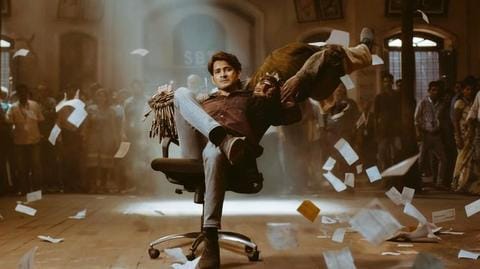 The trailer for Sarkaru Vaari Paata (meaning Government's bid) is finally here! Makers of the drama released its first trailer just 10 days ahead of its theatrical outing on May 12. And, it looks like superstar Mahesh Babu is back with another blockbuster after over two years. The trailer has everything his fans have been craving for: action, romance and drama. Here's a breakdown.

The first half of the trailer shows Babu as a soft-hearted romantic hero as we see him singing, shaking a leg and charmingly wooing his romantic interest, played by Keerthy Suresh. Suresh makes a breezy appearance and gracefully remains in the clip. Though the first half tries to establish Mahesh (Babu) as a lover boy, his introductory scene has him beating up goons mercilessly.

Observation
Second half shows our hero in full action

It is in the second half we witness the transformation (?) of Mahesh to an aggressive individual. High-octane action scenes, him bringing down several rivals effortlessly, and swagger-filled walks complete the trailer. Sadly, Samuthirakani doesn't appear as a fierce antagonist even though the sequences in the trailer try to convey his ferociousness. Only complaint? The lack of subtitles and this is a disappointing miss!

Information
What else do we know of the film?

Directed by Parasuram, the upcoming movie reportedly features Babu as a pawnbroker and banker. Made on a budget of Rs. 60cr, this Telugu film has been bankrolled by Mythri Movie Makers in association with G Mahesh Babu Entertainment and 14 Reels Plus. Sarkaru Vaari Paata may have Babu's daughter Sitara Ghattamaneni dancing in the song Penny. S Thaman has composed its music.