'Godzilla vs. Kong' trailer makes you say "bring it on" 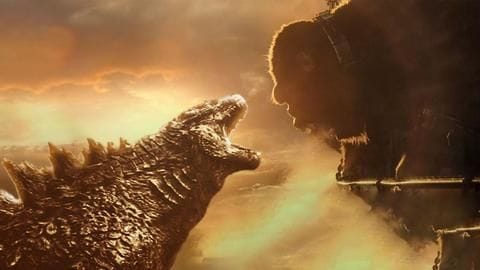 As promised, Warner Bros. has released the first official trailer of Godzilla vs. Kong. And as anticipated, it hits the right notes. Major credit goes to the creators for introducing the two giants in a proper way and not just end up making it a wrestling match between two unfamiliar fighters. The movie will be out on March 26. Here's more about it.

Details
Kong communicates only with a girl child

The trailer starts with mankind trying to decode the behavior of Kong, the greatest ape of all. Scientists search for clues as Kong communicates with only a girl child, who finds respite in the giant's company. Soon after, we see the bruised fingers of Kong touching the gentle surface of the ocean as the camera zooms out to show the process of transporting it.

Trailer
When Godzilla makes the entry

The ravaged titan is tied to the vessel, although he sides with humans for the child. But the vessel is traversing over the ocean, which is the sea monster's territory. Thereafter, the rival titan marks its entry in one of the creepiest fashions ever. The huge, sharp spikes on Godzilla's back cut through a big ship like a mere piece of cake.

Rivalry
And, the fight begins

But Kong is in motion to land the dirtiest punch ever! That's not all as humans attempt to trace the history behind the rivalry, and we see Kong swing one Nozuki against another as Warbats fly down to fight him. This film from Legendary Pictures stars Alexander Skarsgard, Rebecca Hall, Millie Bobby Brown, Shun Oguri, and Kyle Chandler.

The catchiest part of the trailer is the calm before Godzilla's arrival, which only Kong senses. It stomps its fists against the ground and screams, daring the monster to come up and fight. The trailer builds the hype with a hip-hop track as we see Godzilla rising out of the ocean and get on the vessel. We bet you can't wait!