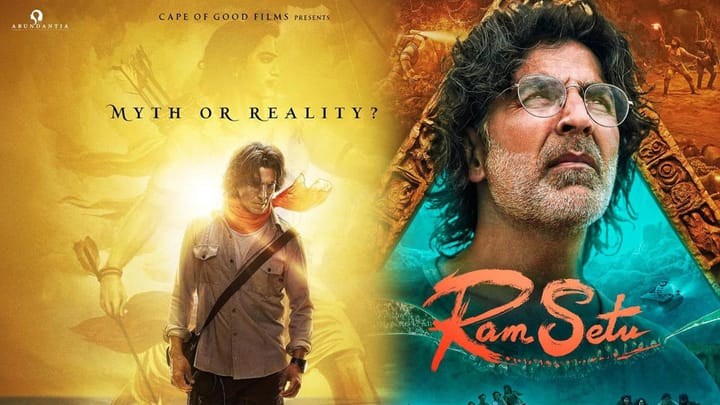 Almost a month before its release, Akshay Kumar has unveiled the first teaser of Ram Setu, which co-stars Jacqueline Fernandez and Nushrratt Bharuccha. Kumar will be playing the role of an archaeologist who's tasked with finding out whether the revered Ram Setu bridge is a myth or reality. The film is directed by Abhishek Sharma and will release theatrically on October 25. Here's more.

The 57-second-long fast-paced teaser opens with Kumar's voiceover, and it seems like he and his team are racing against time to "save Ram Setu." The clip is complemented by a thunderous background score that reminds one of Dussehra/Diwali, and going by the clip, we can expect numerous chase and action sequences. We also catch brief glimpses of veteran actor Nassar and Fernandez.

Here's everything you need to know about 'Ram Setu'

Earlier, Sharma had said that Kumar's look and character "is inspired by several Indian and international professional archaeologists." The film is touted to be "a story formed on facts, science, and historical heritage and is anchored in the deep belief of Indians for centuries." Sharma has also written the movie while Aseem Mishra (Ek Tha Tiger, 83) has handled the cinematography.

It's Ajay Devgn vs Kumar this Diwali!

This Diwali will witness the clash of two superstars—Kumar and Ajay Devgn. Devgn's comedy-drama Thank God, co-starring Rakul Preet Singh and Sidharth Malhotra is also slated to release on October 25. It's directed by Indra Kumar. Earlier this year, Kumar's Raksha Bandhan had also clashed with Aamir Khan's Laal Singh Chaddha on August 11, though both movies fizzled out at the box office.

Kumar is known for churning out three-four films a year, a feat unparalleled by any other A-lister. Kumar will likely have a busy schedule in 2023, too, with Selfiee, Capsule Gill, Bade Miyan Chote Miyan, and Jolly LLB 3 tentatively planned for release. He is also occupied with the Hindi remake of Suriya's National Award winning film Soorarai Pottru, which also stars Radhika Madan.

The face-off between two Jollys!