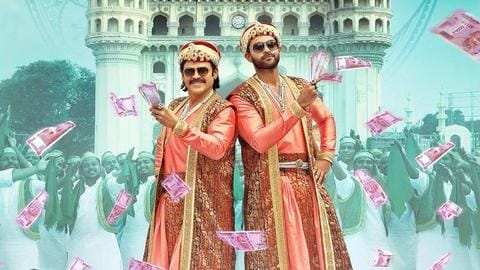 The trailer for F3: Fun and Frustration or simply F3 is here! Starring Venkatesh Daggubati, Varun Tej, Tamannaah, and Mehreen Pirzada, the film is set to hit the big screens on May 27. Going by the trailer, F3 looks like a fun ride. In all probability, it will showcase how a middle-class family attempts to acquire huge wealth. Anil Ravipudi is at the helm.

The 2:35-minute-long trailer introduces Venky (Daggubati) and Varun Yadav (Tej), who are looking out for ways to make big money quickly. Yadav has a stutter, while Venky has night blindness. It also looks like he is hiding his condition from the world. Other characters, including Harika (Tamannaah) and Honey (Pirzada), are shown as women who also have a lust for money.

The dialogues are mostly hilarious and witty. There are some situational comedic scenes that induce laughter but we hope Tej's stutter doesn't land him in trouble. Other supporting actors like Vennela Kishore and Sonal Chauhan make the trailer a complete package. Barring the objectification of women, F3 surely looks like a jolly ride and may overturn Tej's bad streak at the box office.

Details
Know more about the film

Produced by Shirish under Sri Venkateswara Creations, F3 is the sequel to F2 (2019). Noted artist Devi Sri Prasad composed the musical score for the upcoming movie. The Telugu film will have actor Pooja Hegde for a special song though we did not get glimpses of that in the trailer. For this number, the makers had reportedly erected a set at the Annapurna Studios.