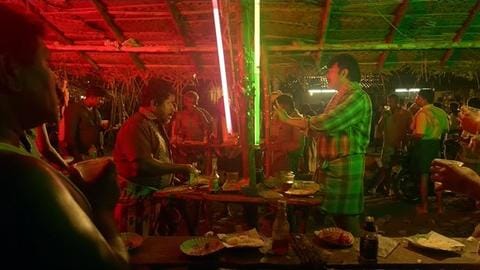 In the latest teaser released by the makers of Mammootty's upcoming film Nanpakal Nerathu Mayakkam, the megastar is seen delivering a fantastic performance, recreating the iconic dialog from Sivaji Ganesan's yesteryear film Gauravam. The second teaser was dropped on Sunday by the makers. Directed by Lijo Jose Pellissery, it is expected that the makers will soon announce the film's release date.

Context
Why does this story matter?
Teaser 2
What does the teaser show?

In the 1:26-minute-long teaser, Mammukka and a few others can be seen in what looks like a bar. An intoxicated Mammootty can be seen recreating an iconic scene with a fierce war of words that happens between two characters, both of which were played by Ganesan in the film Gauravam. Like the first one, the second teaser doesn't reveal anything about the plot.

Teaser 1
What did the first teaser show?

The first teaser was nothing but a montage of random shots with people and animals falling asleep or already sound asleep. With quirky background music and nicely placed shots and a lot of people, the teaser hinted that the film would revolve around a small population of people from a village. Clad in "lungi," Mammootty made a brief appearance toward the end.

Information
All you need to know about 'Nanpakal Nerathu Mayakkam'

Being bankrolled by the veteran actor under his newly-formed production house, Mammootty Kampany, Nanpakal Nerathu Mayakkam (which loosely translates to "daydreaming") had its script penned by Hareesh. The Tamil-Malayalam bilingual film has Ramya Pandian of Tamil Bigg Boss fame as the leading lady. Theni Eswar has cranked the camera. Meanwhile, Mammootty and Jose Pellissery are also collaborating for a section of a Netflix anthology.