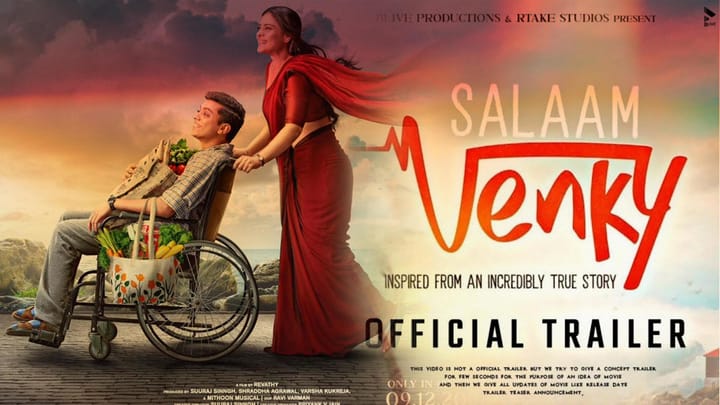 Ahead of its theatrical release on December 9, the makers of Kajol's upcoming film Salaam Venky have dropped the film's trailer. It's directed by actor-filmmaker Revathy and is based on "an unbelievably true story." It has been written by Sameer Arora (Wajah Tum Ho). Salaam Venky also marks the maiden collaboration between Kajol and Revathy. The team started shooting in February this year.

Aamir Khan also appears for few seconds at the end!

The trailer follows a tight-knit bond between a mother and her differently-abled son, as the inevitable tragedy lurks in the background. A heart-rending dialogue from Anand also tugs at our heartstrings in the clip. Rahul Bose, Prakash Raj, and Rajeev Khandelwal's glimpses also act as a breath of fresh air, while the best is reserved for the last: Aamir Khan's special appearance.

Film is a story of perseverance amidst despondency

The most striking aspect of the trailer is the perseverance displayed by the central characters; each time Kajol's character breaks down, her son (Vishal Jethwa) injects hope into her. Mithoon's music, too, lends the film a hopeful, enthusiastic feel. Since Bose and Raj seem to be playing lawyers, it raises intrigue about the film's storyline—will it trigger a discussion about the ethics of euthanasia?

Movie will underline the story of 'an exemplary mother'

Salaam Venky reportedly revolves around "an exemplary mother, Sujata, who battled the most challenging situations one can ever face with a smile." Speaking about the project, Kajol had said earlier, "When I heard the story, I could instantly connect with Sujata. I thought her journey was incredibly inspiring. It deserves to be shared." Mithoon composed the film's melodies, while Ravi Varman handled the cinematography.

Meanwhile, Kajol is gearing up for her OTT series debut

In addition to Salaam Venky, Kajol will soon be seen headlining Disney+ Hotstar's The Good Wife, an Indian adaptation of the American show of the same name. This series will mark the Baazigar actor's web series debut. In September, the actor shared an introductory clip where she could be seen entering a courtroom. The show's tagline reads, "Pyaar. Kanoon. Dhokha (love, law, betrayal)."