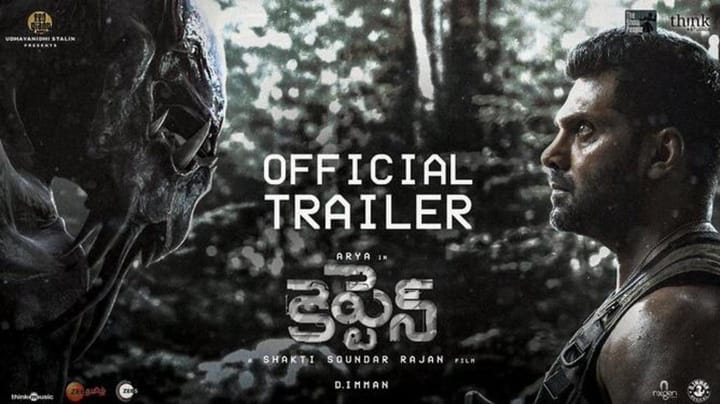 The trailer of Shakti Soundar Rajan's upcoming film Captain is out! Known for his experimental, offbeat style of filmmaking, the helmer is returning after the 2021 fantasy-actioner Teddy starring Arya in the lead. Interestingly, Captain, too, is fronted by Arya. Rajan has also penned the movie. The film is heading toward a theatrical release on September 8. Here's a trailer breakdown.

The film seems to be set in Northeast India

The 2:37-minute-long trailer builds the foundation for the fast-paced entertainer, and by the looks of it, the protagonist will be locking horns with an extraterrestrial opponent. We are introduced to an Army battalion situated in the Northeastern part of India, as Arya's impressive voiceover walks us through "four stages of a battle." The drone shots and fight sequences instantly draw attention, too.

'Captain' seems to have everything: romance, thrill, emotions

The film seems high on intrigue and suspense, considering the formidable enemy here is not just any human, but an alien-like race! Captain also seems to be a cocktail of action, thrill, romance, and intense emotions. While the swift nature of the film is revealed through the clip, at times, it seems to move too fast for its own good, with some blink-and-you-miss-it scenes.

Within minutes of its release, the trailer started receiving attention and acclaim on social media. One Twitter user wrote, "VFX may as well prove to be the film's highlight," while another fan chimed in, "Super Arya+ Shakti Soundar Rajan+ Imman. High-class rich visuals. Simran looks cool. Looking forward to this. Best wishes!" Some people also compared Captain to big-budget Hollywood actioners!

Everything you need to know about 'Captain'