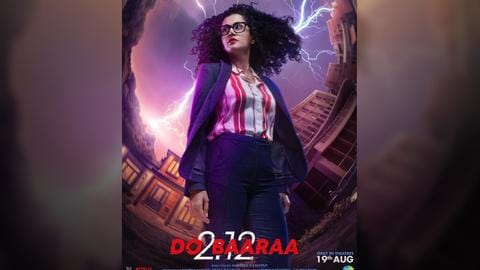 After earning international acclaim at the London Indian Film Festival and Fantasia Film Festival, Anurag Kashyap's Dobaaraa is set to hit theaters on August 19. The film, headlined by his frequent collaborator Taapsee Pannu, is based on the 2018 Spanish film Mirage. Ahead of the release, the makers dropped its trailer on Wednesday. What does the time-travel mystery look like? Here's a trailer breakdown.

Context
Why does this story matter?
Trailer
A story of turning back the clocks?

The trailer, over two minutes long, has laid the foundation for this seemingly well-paced, expeditious thriller. We see Pannu's bonding with her young daughter, while a mysterious television set catches her off guard and takes the lid off a death that took place in the same house more than two decades ago. Will Pannu turn back the clocks to avoid the inevitable?

The word/number play by the team caught our attention instantly, with the trailer announcement time (2:12) coinciding with the title! The clip is painted with strokes of mystery and enigma, and the despondent, gloomy weather doubles up as a character. Questions, suspicions, and skepticism also loom large as Pannu's incessant quest for answers sets in motion a series of unfathomable, unprecedented events.

Several letters from the cast and crew's names are reflected as their mirror images, another example of the team going all out to ramp up the mystifying, supernatural factor of Dobaaraa. In a way, it also reminded us of the American classic The Twilight Zone.

Information
Everything we know about the film

Dobaaraa has been bankrolled by Ektaa R Kapoor, Shobha Kapoor under Cult Movies (a new division of Balaji Telefilms) and Gaurav Bose and Sunir Kheterpal (Athena). The mystery-thriller was announced in February 2021 and has been penned by Nihit Bhave (Choked, Sacred Games). We will also see Pannu's Thappad co-star Pavail Gulati, and actors Rahul Bhatt, and Saswata Chatterjee in key roles in Dobaaraa.

Upcoming films
Where else will we see Pannu?

Pannu was recently seen in Shabaash Mithu, a biopic based on former Indian cricket team captain Mithali Raj. This year, she has Arshad Syed's Woh Ladki Hai Kahaan in her kitty, co-starring Prateik Babbar and Pratik Gandhi. In 2023, she will be seen in her career's most ambitious venture, Rajkumar Hirai's Dunki, where she will be sharing screen space with Shah Rukh Khan.