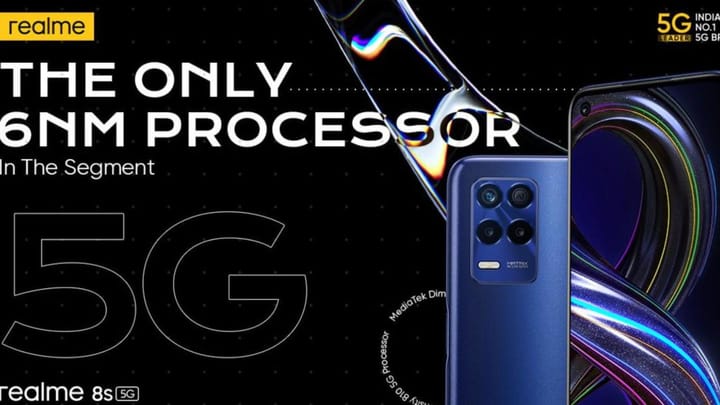 Realme will launch its latest 8s 5G smartphone in India on September 9. The company has created an interactive game called Escape The Infinite on YouTube, wherein Jannat Zubair has to help Rannvijay Singha escape captivity. However, the viewers have to choose between possibilities and direct the game. In each part, Realme has also teased the key features of the 8s 5G handset.

The phone will have a 90Hz HD+ display

The Realme 8s 5G will feature a punch-hole design with a noticeable bottom bezel and a side-mounted fingerprint sensor. On the rear, there will be a triple camera setup. The handset will bear a 6.5-inch HD+ (720x1600 pixels) IPS LCD screen with an aspect ratio of 20:9 and a 90Hz refresh rate. It will be offered in Universe Purple and Universe Blue color options.

It will sport a 64MP main camera

The Realme 8s 5G will be equipped with a triple rear camera module comprising a 64MP primary sensor coupled with two 2MP lenses. For selfies and video calling, there will be a 16MP front-facing camera.

The phone will support up to 13GB of virtual RAM

Power to expand is now in your hands!

The Dynamic RAM Expansion technology lets you expand the virtual RAM up to 13GB so that you can multitask all you want.

It will be powered by a MediaTek Dimensity 810 chipset

The Realme 8s 5G will be powered by a MediaTek Dimensity 810 chipset, paired with up to 8GB of RAM and up to 256GB of storage. It will run on Android 11-based Realme UI 2.0 and pack a 5,000mAh battery with 33W fast-charging support. For connectivity, the device will offer support for dual-band Wi-Fi, Bluetooth 5.1, GPS, and a Type-C port.

Realme will announce the official pricing details of the 8s 5G smartphone at the time of the launch, which will take place in India on September 9. However, considering the specifications, it may cost around Rs. 15,000. The handset will be available via Flipkart.