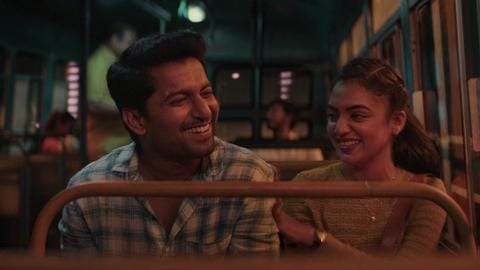 Context
Why does this story matter?
Teaser
What does the teaser offer?

The teaser establishes Sundar's character right from the first frame. A devout Hindu, he performs puja sincerely, wears a weird combination of shirt and dhoti to office, is pampered by his family, but is also forced to follow what astrologers and horoscope readers say. Leela's family, on the other hand, are Christians. The character of Leela is somewhat opposite to Sundar's tight persona.

Conflict
What is the real conflict though?

Sundar and Leela eventually fall in love, shocking their families. The religious divide, however, isn't the ONLY conflict, as there is much more. That is, thankfully, not shown to us. Keeping the viewers pondering is where the teaser to Ante Sundaraniki (which means The thing about Sundar is) wins. But, the video's length at 2:10 minutes is too long to be called a teaser.

Vivek Sagar's background score provides the appropriate breeziness in the clip. Apart from Nani and Nazim, the upcoming movie stars Azhagam Perumal (Deepan Anthony from The Family Man 2) as her father. VK Naresh, Rohini, Nadiya, Harshavarshan, and Rahul Ramakrishna round up the cast of the Telugu film. Ante Sundaraniki will be simultaneously released as Adade Sundara in Tamil and Aha Sundara in Malayalam.