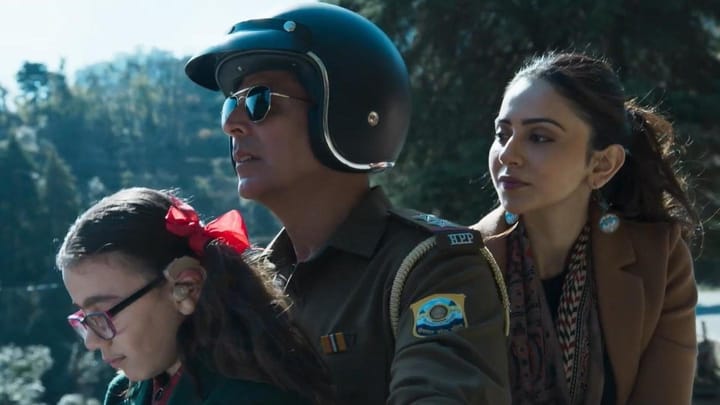 There's no stopping Akshay Kumar! Kumar is currently gearing up for the release of the crime-drama Cuttputlli, helmed by Ranjit M Tewari. Ahead of its release on Disney+ Hotstar on September 2, the makers have dropped its much-awaited trailer. The film is a remake of the 2018 film Ratsasan and co-stars Rakul Preet Singh. It's Kumar's first direct-to-OTT 2022 release. Here's a trailer breakdown.

The trailer, slightly over two minutes, establishes the film's intense plot which is set in the sleepy hill station of Kasauli. Kumar's voiceover introduces us to a notorious serial killer who has wreaked havoc in the city and is famous for leaving dead bodies in public places after committing crimes. Kumar dominates the entire clip and Rakul Preet Singh only appears in blink-and-you-miss-it glimpses.

Trailer doesn't give much away, raises intrigue

Kumar's character is reminiscent of his previous films like Special 26, Holiday, and Sooryavanshi. The thrill quotient seems high and is complemented well by a haunting background score that blends seamlessly into the narrative. The film's title, too, is noteworthy and raises intrigue: Will it talk about a character equal to a kathputli (puppet) whose strings are handled by someone else? Perhaps the killer?

Kumar has a packed schedule ahead of him

Kumar has a reputation for maintaining a chock-a-block calendar and a look at his upcoming films further reiterates his packed schedule. Ram Setu, co-starring Jacqueline Fernandez and Nushrratt Bharuccha, is slated for release on Diwali this year. Moreover, comedy-drama Selfiee, biopic Capsule Gill, action film Bade Miyan Chote Miyan, and social-drama Jolly LLB 3, are all tentatively planned for release next year.

Poll
Which film would you like to know more about?
'Ram Setu'
59.27%
'Capsule Gill'
40.73%
Poll is completed
Revisit the first-look poster here.

Here's all we know about the biopic so far.