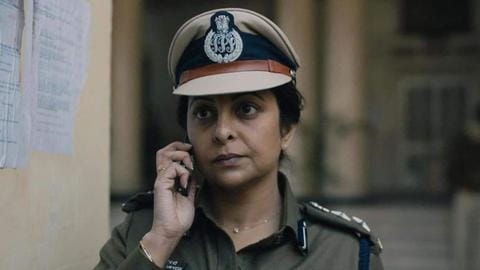 The trailer of Shefali Shah-led Delhi Crime: Season 2 is out. The crime show will premiere on OTT giant Netflix on August 26. Shah is joined by a formidable ensemble comprising Rasika Dugal (Mirzapur), Rajesh Tailang (Phantom, Pagglait), and Adil Hussain (Parched, English Vinglish). To recall, the first season had dropped on the streaming platform in 2019. Here's a trailer breakdown.

Context
Why does this story matter?
Trailer
DCP Chaturvedi, team on the prowl for serial killer

While the maiden season was knit around the heinous Nirbhaya case that sent shockwaves across the country, this one has a different case at the forefront. The clip re-introduces us to DCP Vartika Chaturvedi (Shah), who has now locked horns with a devilish serial killer who has terrorized the city. Chaturvedi is accompanied by her associates on this quest to nab the killer.

The trailer further dives deeper into the chasm between the haves and the have-nots, something it had touched upon in its teaser, too. The fast-paced nature of the show is foreshadowed in the clip, as we see the police officers fighting tooth and nail to get to the killer. The trailer also clarified that this season, too, is inspired by true events.

Upcoming projects
Where else will we see Shah, Dugal?