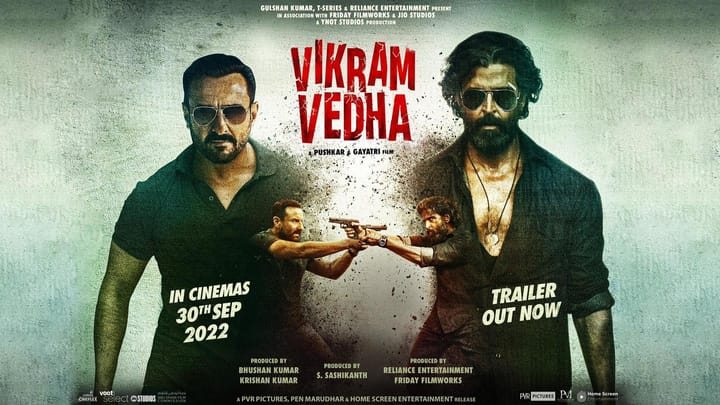 The trailer of Hrithik Roshan-Saif Ali Khan starrer Vikram Vedha was released on Thursday (September 8) amidst tremendous fanfare and hype. It's the Hindi remake of the 2017 Tamil action-thriller of the same name that emerged as a stupendous success down South. Director duo Pushkar-Gayatri has helmed and written both versions. The film is heading toward a theatrical release on September 30.

More than anything else, powerful background score stands out

The 2:51-minute-long trailer begins in a traditional dastangoi way, a hark back to Betaal Pacheesi. The trailer is fueled by a potent background score that heightens its grave mood; it's also the unifying factor that ties the entire clip together. Radhika Apte appears briefly and though she only says one dialogue, by the looks of it, she thankfully hasn't been reduced to a crutch.

Roshan takes the cake as the ghastly, remorseless gangster Vedha

We finally hear something from Ali Khan (he had no lines in the teaser) and he looks terrific as a cop committed to a cause. Roshan looks menacing as the remorseless gangster who has never known an iota of mercy in his life. The trailer locks the two in a head-on battle and underlines the virtues (or the lack thereof) that define the two.

Did Roshan's accent remind you of 'Super 30'?

Though Roshan looks deliciously devilish and seems to have outdone himself in the action department, his UP/Bihar accent is an immediate reminder of his character from Super 30. We hope that won't take the edge off his intense, cold-blooded avatar in Vikram Vedha.