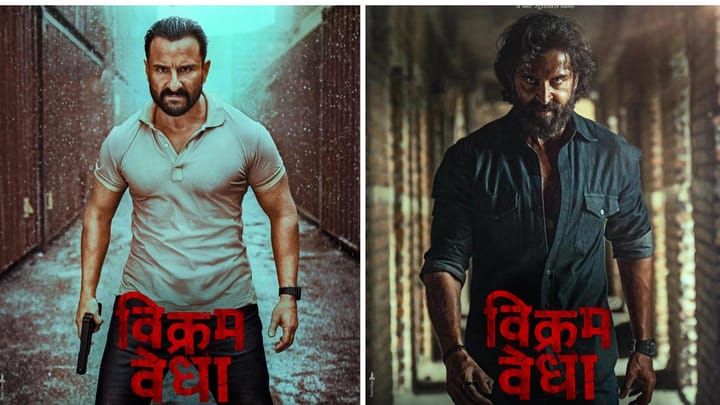 And, it's finally out! After what seems like eons, the makers of upcoming crime-action film Vikram Vedha greeted fans with the movie's first teaser! Directed by Pushkar-Gayatri, it's a Hindi remake of its namesake Tamil counterpart (2017) that was helmed by the same directors. Fronted by Hrithik Roshan and Saif Ali Khan, it will release on September 30. Let's dive into the teaser.

'Vikram Vedha' will be a story of 'fun and surprise'!

At the beginning of the 1:45-minute-long teaser, Vedha (Hrithik Roshan) promises a tale of "fun and surprise." Sure enough, the high-intensity teaser then pits the duo against each other, and Vedha seems to embroil Vikram (Saif Ali Khan), in a game of cat-and-mouse chase. A haunting background score blends into the narrative seamlessly, particularly when we see the protagonists' personal lives and backstories.

The teaser seems to imply that the lines between good and evil are not definite, but rather blurred. We also catch a small glimpse of Dussehra and see Ravana's effigy being reduced to ashes—a metaphor to define morality's eventual triumph. While Roshan looks deliciously devilish and lets his eyes and action do the talking, we would've loved to hear something from Ali Khan, too!

Will the film be marred by the ongoing boycott trends?

It has become commonplace for several Bollywood films to be at the receiving end of ruthless trolling. Recently, Vikram Vedha came under the radar of the boycott gang, and Roshan was targeted for his support to Laal Singh Chaddha, another film still reeling under the boycott trends. Thus, it remains to be seen if Vikram Vedha's collections will drown under the ongoing "anti-Bollywood" wave.

Here's everything you need to know about the film

The film also stars Radhika Apte, Rohit Saraf, Satyadeep Misra, and Sharib Hashmi. In addition to directing the movie, the helmers have also written the script. Vikram Vedha will mark Roshan's return to celluloid after three years. He was last seen in Sidharth Anand's War (2019). Parvez Shaikh (Bang Bang) has supervised the stunts, while Vishal-Shekhar and Sam CS have handled the music department.