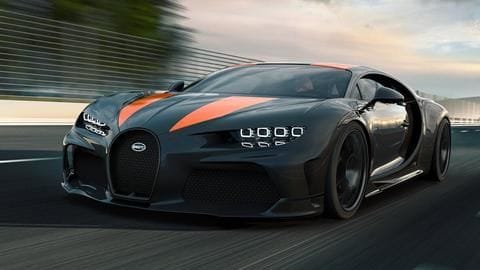 French automaker Bugatti's Chiron Super Sport 300+, with a top-speed of 490.484km/h, is considered to be the world's fastest series production car. The key to achieving this record-setting top-speed involves a series of aerodynamic upgrades as well as technological advancements. Let us have a look at some of the optimizations that were required to bring this beast to life.

The Chiron Super Sport 300+ packs wing-like air curtains on the front that aid in guiding the air around corners. Extensive research has been done to find their ideal curvature and thickness. They also ensure that the airflow follows the body's contours so that the car remains stable at high speeds. Air vents on the front wheel arches also help in balancing aero loads.

The Chiron Super Sport 300+ has nine cylindrical air outlets on the front wheel arches and each vent is of a different size. At a speed of 380km/h, these air outlets generate around 20-30kg of extra downforce and prevent the front of the car from getting lifted in the air due to dynamic pressure in the wheel arches.

Cooling
Airflow via radiator is nearly 8% more than standard Chiron

We need an ideal airflow over the front of the car to have stability at high speeds. But an optimum amount of air should also pass through the radiator to cool the thunderous 8.0-liter W16 engine of the car. With fine tuning, Bugatti has achieved 8% higher airflow through the radiator of Chiron Super Sport 300+ in comparison to the standard Chiron.

Design
Wind resistance is low thanks to the tail section's design

In comparison to the standard model, the Chiron Super Sport 300+ has a 25cm long rear section, called "longtail." Its design ensures lower wind resistance: a factor that slows down cars. There is also a redesigned diffuser on the car's underside which helps in stabilizing the vehicle at speeds above 400km/h. A large rear-wing is also offered which completely retracts in top-speed mode.

Information
The hypercar packs a W16 engine with four turbochargers

The Chiron Super Sport 300+ runs on an 8.0-liter W16 engine that churns out 1,587hp of power and 1,600Nm of torque. The mill packs four efficient turbochargers which use a larger 77mm compressor wheel for higher throughput. A 3D printed titanium exhaust is also available.

To improve high-speed performance, Bugatti has increased the rear axle spring rate in Chiron Super Sport 300+ by 7% as compared to the standard Chiron. The car can be effortlessly driven at speeds above 420km/h. The vehicle runs on special Michelin Pilot-Sport-Cup-2 tires which are extremely rigid and smooth. They have been tested at over 500km/h and every tire is X-rayed to detect irregularities.

For the Chiron Super Sport 300+, the brand has developed 5-spoke aluminium rims with increased rigidity for longitudinal dynamics. They weigh 4kg less per set than those of the standard Chiron. The company also offers magnesium rims that weighs 16kg less than regular Chiron rims. Lighter rims help further reduce unsprung mass at both the axles.