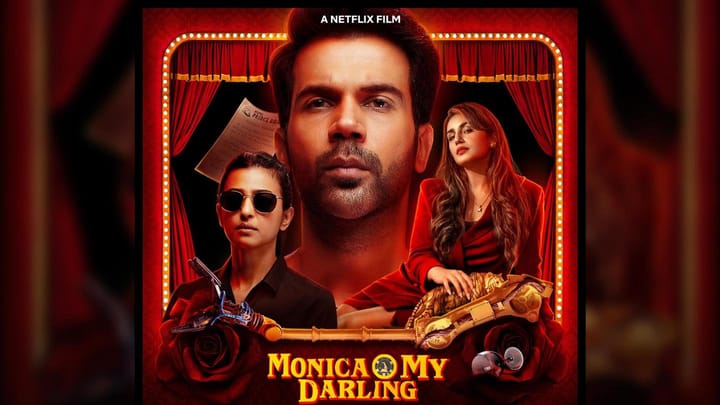 After raising audiences' intrigue through an impressive teaser in August, the makers of upcoming neo-noir mystery thriller Monica, O My Darling have finally unveiled the film's trailer. The film stars an ensemble cast of Radhika Apte, Rajkummar Rao, Huma Qureshi, and Sikander Kher in the lead and is helmed by writer-director Vasan Bala. It'll land on Netflix on November 11. Here's a trailer breakdown.

The trailer—over two minutes long—doesn't give the story away, and yet, keeps us engaged and hooked. Going by the clip, it seems like the film will pit all characters against each other, with ulterior motives and chameleon-like traits swimming to the surface gradually. The snake-and-ladder game in the backdrop also foreshadows what we can expect from this offbeat murder mystery thriller.

Retro vibe, meta references steal the show in the clip

The most significant takeaway is the retro vibe the trailer is marinated in, thanks to the eponymous song that plays throughout. It also swarms with several meta references, such as Radhika Apte alluding to a popular social media viral song and Rao talking about a popular Hindi crime show! With such intelligent writing and potent performances, the thriller looks like a winner already.

Here's all we know about 'Monica, O My Darling'

The film is touted to be a story about "a young man who desperately tries to make it big with some unlikely allies and a dastardly diabolical plan to pull off the perfect murder." It has been written by Yogesh Chandekar, who had previously penned the path-breaking Andhadhun. Sukesh Viswanath (Rocket Boys) and Swapnil S Sonawane (Sacred Games, Newton) have spearheaded the cinematography department.