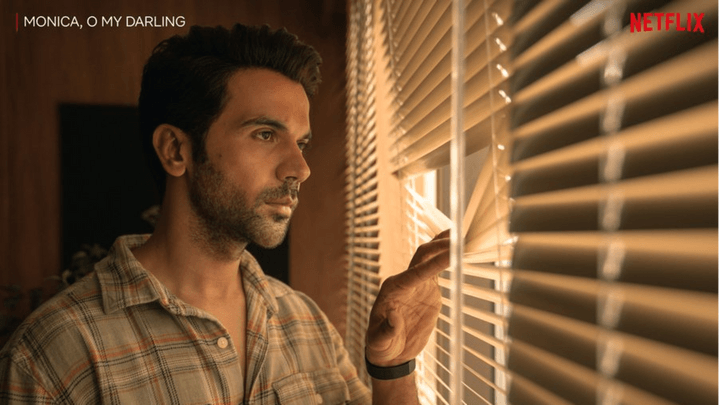 Netflix recently delighted viewers by announcing a spate of upcoming intriguing releases. One of these new films is Rajkummar Rao-Huma Qureshi fronted neo-noir thriller Monica, O My Darling, helmed by Vasan Bala. The makers have finally unveiled the first teaser, and it has further added to our already mounting expectations! The release date is yet to be announced. Here's a teaser breakdown.

The clip is marinated in mystery, doesn't give anything away

The teaser, just over a minute long, introduces us to Jayant (Rajkummar Rao), who plays the "Prince of Angola." He seems to be stuck in an unexplained mystery with his friends/acquaintances: Apte, Qureshi, Sikander Kher, and Akansha Ranjan Kapoor. The characters also repeatedly talk about Jayant's "story" and it remains to be seen what kind of implications will this backstory have on the plot.

Here's all we know about 'Monica, O My Darling'

The film is touted to be a story about "a young man who desperately tries to make it big with some unlikely allies and a dastardly diabolical plan to pull off the perfect murder." It has been written by Yogesh Chandekar, who had previously penned the path-breaking Andhadhun. Sukesh Viswanath (Rocket Boys) and Swapnil S. Sonawane (Sacred Games, Newton) have spearheaded the cinematography department.

Where else will we see the three lead actors?

Rao was last seen in HIT: The First Case in July. Apart from Monica, O My Darling, he has Mr. and Mrs. Mahi with Janhvi Kapoor, Bheed with Bhumi Pednekar, and Netflix's web series Guns and Gulaabs. Apte is currently awaiting the release of Vikram Vedha on September 30. On the other hand, Qureshi will be seen in Pooja Meri Jaan and Double XL.

Poll
Which of these Rajkummar Rao films would you like to know more about?
'Mr. and Mrs. Mahi'
53.42%
'Bheed'
46.58%
Poll is completed
Great choice! Here are the details.

Read about the social drama here.